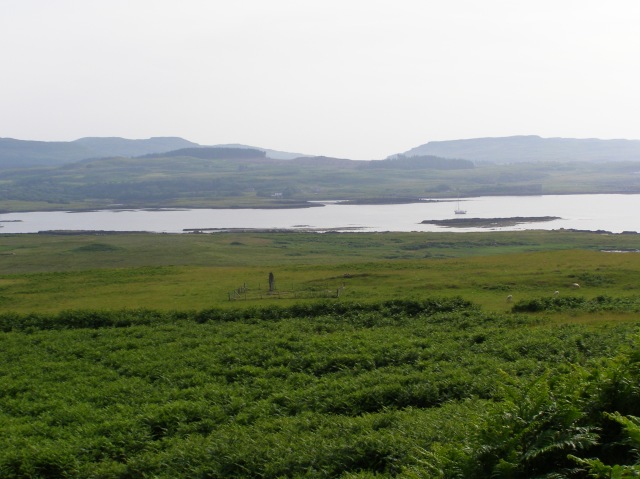 The Caliach or old woman. She stands on a hillside overlooking the sea, tall, thin and ancient, battered a little by the years, keeping lonely watch, millennia long. Penned in now as if there were a need to imprison and control her, as if she would walk out to sea when no-one was looking. Two fallen companions lie beside her, prostrate and cold, half burie 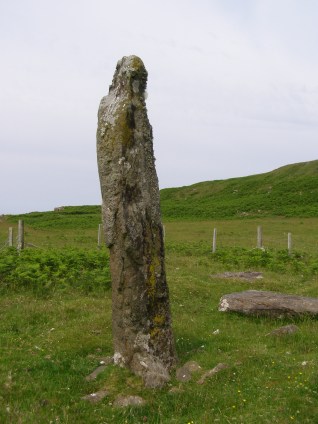 d in the soil, within their wood and wire prison. Yet this is a permeable prison. Broken fence wires have allowed in animals to keep the Cailach and her recumbent friends company. Clumps of sheep wool litter the ground and cling to the wire fence; white decorations, a reminder of the company these stones usually keep. A single wooden stile invites human visitors in. We entered the sacred space, briefly joining the old woman in her lonely vigil. Hands on stone, comforting her for her loss, for the fallen friends beside. Then out again into the freedom, leaving behind this single upright stone. Still standing proud, still watching over the landscape after a vigil spanning millennia, faithful and enduring, but now contained and tamed in attempts to protect and cocoon this relict of the past. But maybe, just maybe, when we are not looking, this stone caliach breaks free from her prison and still walks the landscape. Maybe, just maybe, she is more than just a relic of the past, more than something to be defined, contained and set aside, but an in-the-present part of the landscape, indivisible from it, still imbued with meaning, with value, a vital part of the present. 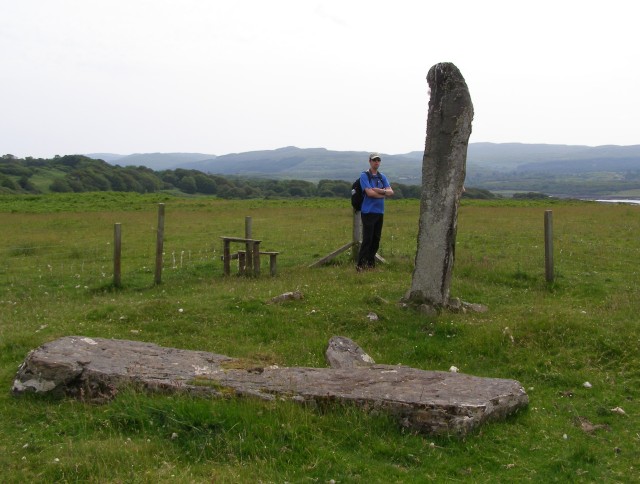 Also known as the Caliach, which means old woman in gaelic, the standing stone at Quinish on the Isle of Mull is an obvious reminder of the prehistory of this part of the island. It stand on a level, fertile terrace overlooking the sea at the north end of the island, close to the Minguary estate and less than an hour’s walk from the village of Dervaig. The Quinish stone is tall and does indeed look like the profile of a human figure, or old woman, from particular directions as the name of the caliach suggests. The caliach, though, does not stand in isolation – two companions lie fallen in the grass, along with the stump of a possible fourth. Therefore she was once part of a row of standing stones. When I visited just over a year ago, I was interested to see that the Quinish stones had been surrounded by a post and wire fence – when I visited here for the first time almost fifteen years ago as part of the research for my undergraduate dissertation, they were unpenned. This is likely an attempt to protect the stones, though it does create an appearance more like containment and of dividing the old from the present. For me, it certainly altered the way in which I experienced and even thought about these stones. Suddenly, they had to be separated from the everyday, surrounding landscape, though the broken fence served to mitigate that slightly. Can we, though, ever really separate the past from the present? The sheep at Quinish certainly don’t seem to think so! Although never excavated, the Quinish stones are likely of Bronze Age date. More information is available on RCAHMS website and isle of mull.net

1 Response to The Old Woman