A village in hiding: The Binn part 1

It is a grey, overcast summer morning. And I am going on an Adventure. Everyone must have an adventure from time to time, I believe, and so I have made today my Adventure Day. I will venture out into the unknown (to me). I will bravely step forth and explore. I will have an Adventure.

But first I must reach the train station and find my train. So I leave my flat and stride along familiar streets, past known landmarks – the corner shop where I usually buy my milk, the coffee shop, the church on the corner, the hardware shop – and descend the steps into the train station. I buy my ticket and then scan the departure boards for my train. Platform 16. I have ten minutes and the train is already waiting, doors open, ready the receive passengers. Passing through the ticket barriers, I make my way to the platform and board the train, careful to select a window seat that will afford uninterrupted views.

The train is quiet. By the time it pulls away from the station, a few more passengers have entered, but this is not a busy train. I settle back and gaze out the window as we travel through Edinburgh, passing city landmarks and out past the airport with its queues of aircraft neatly lined up to take off. The train stops briefly at South Queensferry station and then begins to cross the Forth Rail Bridge. Crossing the Forth Bridge always gives me a thrill and this 19th century engineering feat remains magnificent. Its red painted supports speed past the window and I strain to look at the view. I note a large cruise ship lying anchored a short distance from the bridge, passengers in a small boat evidently in the process of being ferried to shore, the piers and slipways beneath the bridge at South and North Queensferry, still in use, the small islands with their wartime defences, white sea birds dotting the ruins, and the shoreline of Fife beyond. I glance to my left and there, beyond the current road bridge is the new bridge, the Queensferry Crossing, almost complete and gleaming in the morning light. A trio of bridges spanning the same expanse and sharing the same purpose – to transport people and traffic across the Firth of Forth, to link the Lothians and Fife. Companions built in three different centuries, 19th, 20th and 21st, they are a visual reminder of the importance of this crossing. The piers and slipways below the bridges are perhaps less impressive, but tell too of the time depth of a crossing here, and the long necessity of this link across the Forth. Below, the water of the Firth of Forth is grey and deep.

The train reaches the other side and we are in the Kingdom of Fife. As the train travels through the countryside, I keep an eye on the passing stations – Inverkeithing, Dalgety Bay, Aberdour (with a glimpse of the castle beside the station). My stop is next. Burntisland. The train slows to a stop and I alight, exit the station and follow signs to the town centre. From there I am heading up The Binn, the hill that dominates this seaside town. I have never been to Burntisland before so this is a new experience for me. A step into the unknown. An Adventure. But it is not completely unknown to me. I have done my research. I know my route and I know the things, the archaeology, that I want to see along the way. It is these, along with the fabulous view that I know is available from the top of this hill, which are the real draws to this place. The real reason for my visit. So I begin on my quest.

Following the maps on my phone, I make my way through the town towards the foot of the hill. Past the summer ‘shows’**, not yet fully into the days running, and through residential streets to the edge of the town. There, opposite the golf course with its carpark full of cars, is the beginning of my path. Carefully crossing the road, I step into another world. Trees bend their branches over me, creating a kind of natural arch and filtering a cool, greenish, light. I feel enclosed, but safe and cocooned within the trees, beckoned forward. The path begins to climb and I follow it deeper into the wood. As I walk I become aware of stonework here and there on my left and realise the path follows the remains of wall. Well overgrown, it is difficult to distinguish, but it is there nonetheless. I wonder if this is a hint of the remains I seek. 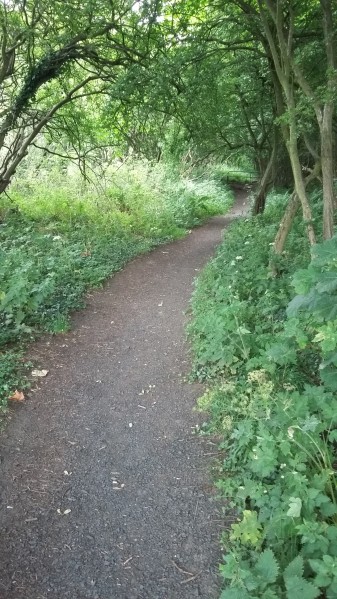 The trees open out and in a clearer patch, concrete steps lead me upwards. The climb is steep, but short and soon the ground levels out. I find myself at a junction of paths. Which way to go? Pulling out my phone I consult the map. Left will take me along the top of the hill, but first I want to look at the remains of the Binnend Village. A now abandoned settlement constructed in the late 1800s, here on the hillside, to provide accommodation for those working in the shale oil industry and their families. It is worth a visit, or so I am told.

As I try to make sense of the map, my thoughts are interrupted by a distinct shout of ‘fore’ drifting up from the golf course below. It makes me smile to think of the leisure pursuits below, in an area once teeming with industry. For the golf course sits next to the site of 19th century shale oil works, intimately connected with the remains that I seek.

I think I must go straight ahead to find the remains of the village, so I continue walking. Some bits of stonework begin peeking out of the heavy vegetation and then I see some more substantial ruins and realise that I have found it. I have found the village. But the remains are surrounded by masses of knee-high nettles and I can see no way in. A little further on, by dint of pushing through thick grass (thankfully largely nettle free), I find a vantage point to look over the remains. I look and take photographs, but can see no way to reach the ruins themselves, nor is it possible to ascertain the compete layout of the remains I can see. Certainly not without risking serious nettle stings! This, I think, is one abandoned village that does not welcome visitors easily. Or so I think. 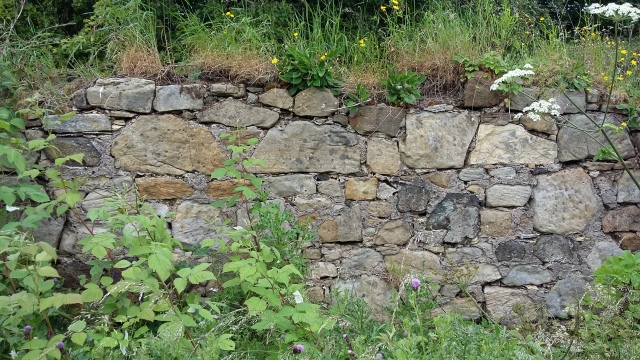 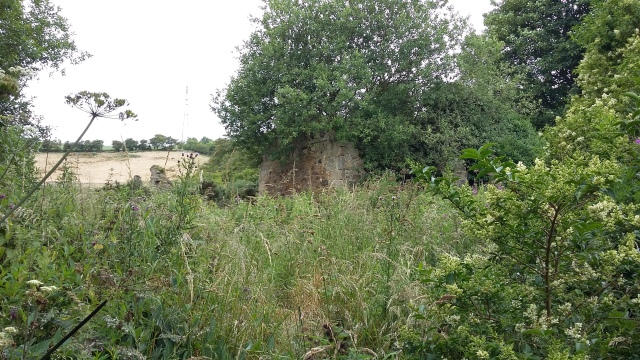 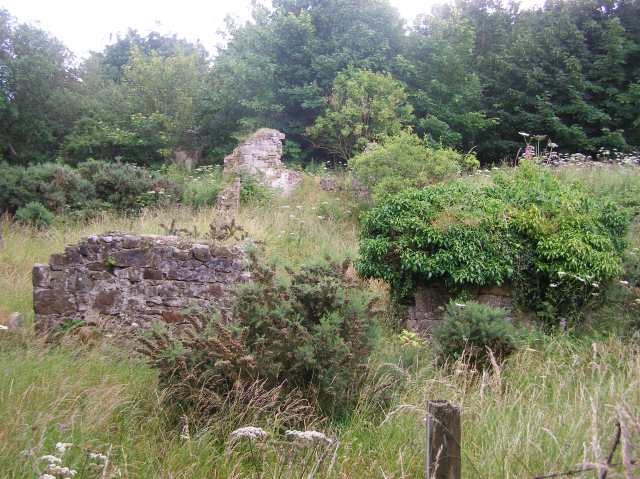 Retracing my steps a little, I return to the junction of paths and take the track that will lead me to the summit of the hill. A short way along, I realise I can see more stonework to the right. I think at first it is a bit of a field wall, but looking closer it seems more substantial than that. It is under trees and there is little vegetation underfoot, so I make my way towards it and realise it is the remains of a building. Look! There’s a fireplace. It is a house then. This must be more of the Binnend Village. Looking round I realise it is one part of a row of houses running roughly north-south. I can see another, longer row, oriented east-west. Bricks, slates and tumbled stonework scatter the ground. Trees grow out of former walls. I follow the longer row until the undergrowth gets too dense. More of those nettles! And realise I have come right round behind the ruins I had noted before. The nettles are still too dense to reach them, but it appears that not all of the village is as unwelcoming as I first thought.

Somehow I had not appreciated that this former village would have been so large and had been fooled into thinking that the nettle surrounded ruins were all that remained. But I was wrong. Census records tell us that the village had a population of more than 500 in the late 1800s, living within 95 small, mostly two roomed houses. The village also had a Mission Hall, school, football pitch and shops. The essentials for life!  All within sight, sound and smell of the nearby oil works at the bottom of the hill, close to where the golf course is now. The shale oil business, though, was short lived with the works closing in 1894 and, with it, the population of the village declined. The village was finally formally closed in 1931, though two couples continued to live there until the 1950s.

It is evident that considerable quantities of stone have been removed from the houses, for little is left of many of them. The more substantial remains are those swathed in nettles. Cloaked in trees, largely overgrown and with many of the houses reduced to footings and tumbled stone, it is difficult to imagine this place bustling with life not so long ago. For it must have been full of people and buildings and the daily chores of life. Its sights and sounds so different from today. Who lived within the walls I see laid out before me? How many lives were crammed into this space? What of their hopes, dreams and desires? I do not know, but the ground, this space, almost seems to resonate with lives lived, gone and scattered. 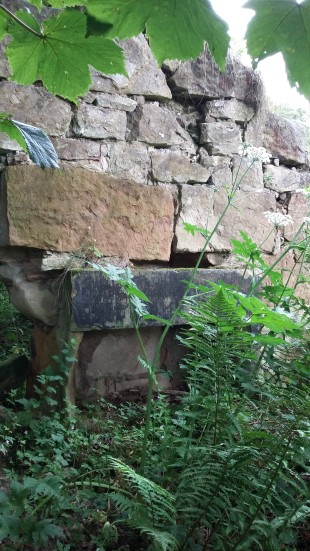 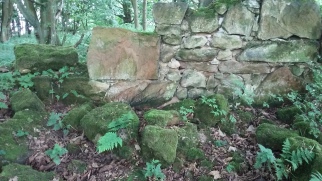 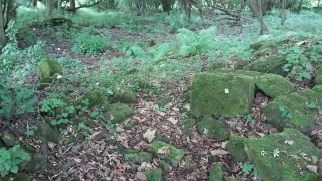 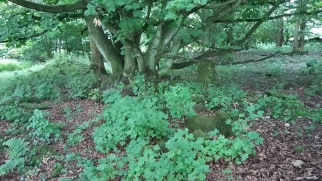 Now, though, it is almost as if the village is in hiding within the vegetation. Half removed and with the people long gone, is it ashamed of its ruined and abandoned state? Ashamed at being found half-dressed, decrepit, old? But there is beauty still in these ruins, in the tumbled stone and foundations, in the surprise remains and moss-grown brick. Even in the trees colonising the stonework. The vegetation hugs the remains, perhaps providing comfort for what has gone, what has been lost. Lonely and a little forlorn, there is dignity still in the tumbled ruins. It will not last forever, nothing will. But it is a reminder that even old, forgotten things can be beautiful. Wrapped within burgeoning vegetation, protected by returning nature, this place surely hides many secrets and welcomes only some within its tumbled walls.

So I turn my back to this place of past lives and continue to walk up the hill, towards the ultimate goal of my walk. For this has been but an aside to the main aim of my Adventure …..

This entry was posted in Current landscape, Past landscape and tagged archaeology, Burntisland, Fife, history, past lives, social history. Bookmark the permalink.

3 Responses to A village in hiding: The Binn part 1